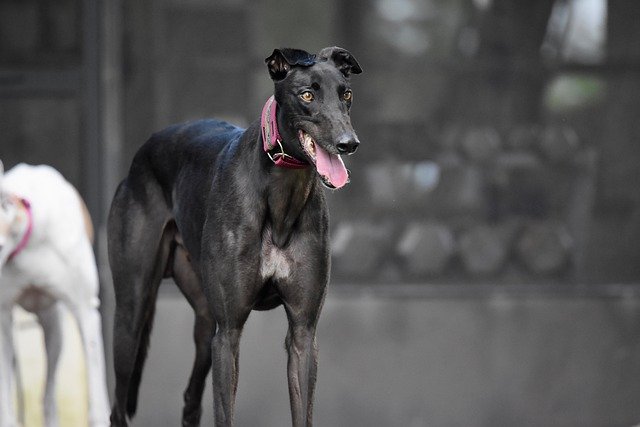 The greyhound’s devotion to man is legendary. They seem grateful for their new homes and reward their owners with never-ending affection. Raised with their littermates where they competed for attention, greyhounds love becoming the center of your attention as pets and will reward your love and affection by returning it tenfold! 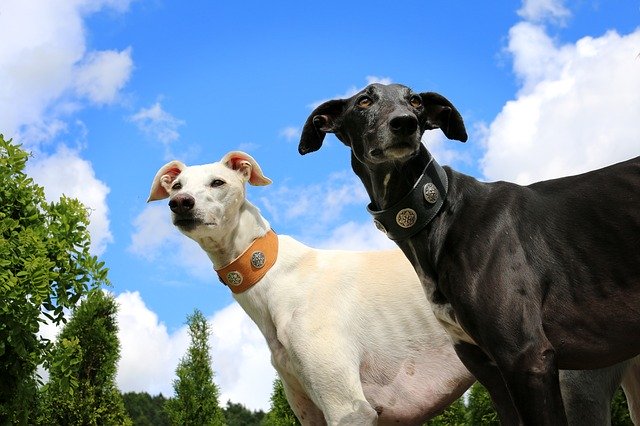 One difference between pet greyhounds and the average pet breed is that greyhounds (adults when adopted) have spent every waking moment in the company of other creatures. They have experienced lots of handling and frequent daily contact with humans and other dogs.

This background makes the greyhound well suited for life with other dogs and with people whose schedules allow one or more persons to be home much of the time. The bottom line? Greyhounds demand a certain amount of contact. They bond with their adoptive families quickly and pine when alone.

Greyhounds can have special medical problems. Some are unique to the breed. Some diseases have been contracted because they have traveled the country exposed to disease-carrying ticks and fleas. Some are caused by poor care before being rescued by adoption agencies.

We hope the following will help you recognize medical problems in your pet greyhound.

Pale gums can indicate your greyhound has a blood parasite. Blood tests are available to test for these parasites.

This is a relatively common disease found in Retired Greyhounds. A blood parasite, transmitted by the bite of a tick, a positive titer is found in approximately 75-80% of retired racers. Even dogs brought in from more Northern states are at risk due to the constant travel and shipping from track to track, with most tracks located in Southern states.

A low titer, indicates exposure to the disease, whereas a high to moderately high titer may indicate active disease (even without clinical signs). Dogs with a high titer should be treated before they show signs of illness.

syndrome seen in many Retired Greyhounds is in most cases due to “cage rub.” Hypothyroidism is often blamed as the cause, however, this is seldom true. Many dogs regain their haircoat with time, others do not. 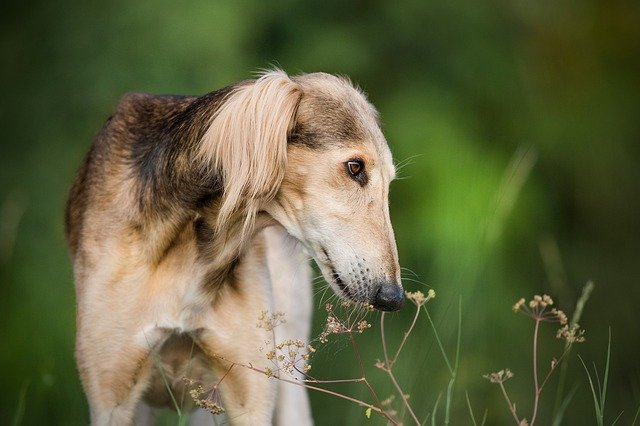 While not as common in greyhounds as other deep-chested dogs, greyhounds can have bloat. An enlarged abdomen, obvious discomfort and trouble breathing are indications for immediate emergency veterinary care.

Many Greyhounds come off the track with broken toes or amputated toes. These are often old injuries that are beyond repair. A dog that has pain from an old broken toe can be made comfortable by amputating the toe.

Due to the lack of adequate medical care in many instances, dogs may suffer from chronic untreated infections. Chronic ear, eye and bladder infections may require extended special treatments.

Many female dogs suffer from clitoral hypertrophy due to the steroid injections received on the track. This may become less prominent over time. This may lead to vaginal infections, or show no obvious signs of problems. Surgery is not usually recommended. 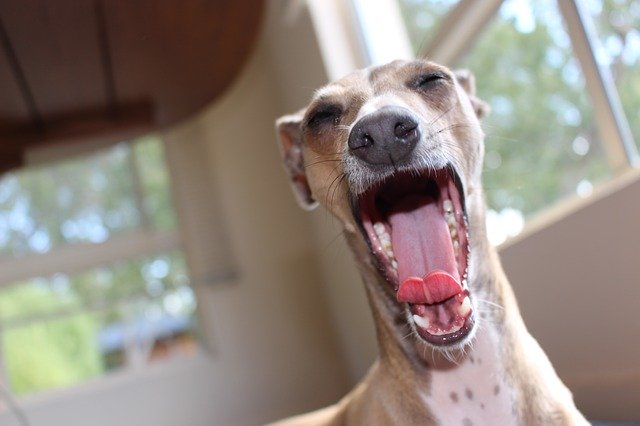 Due to the poor sanitary conditions they are kept in, many Retired Racers suffer from chronic skin diseases. Many chronic skin infections require extended special treatments. Others will benefit from dietary supplements.

Poorly haired dogs may develop small bloodblister like lesions on various areas of the body. Most often appearing on the belly and thighs, these small raised lesions are exacerbated or even due to sunlight.

This is the benign precursor to a cancerous condition, so it is recommended that dogs that develop this condition be protected from sunlight with skin block and protective clothing.

Chronic or recurring diarrhea in retired racers can be caused by bacteria not commonly seen in other pet dogs. They are often fed raw, diseased meat, which may be the origin of this bacteria. Certain antibiotics are more effective at eliminating this parasite; constant sanitization is essential to prevent spread. 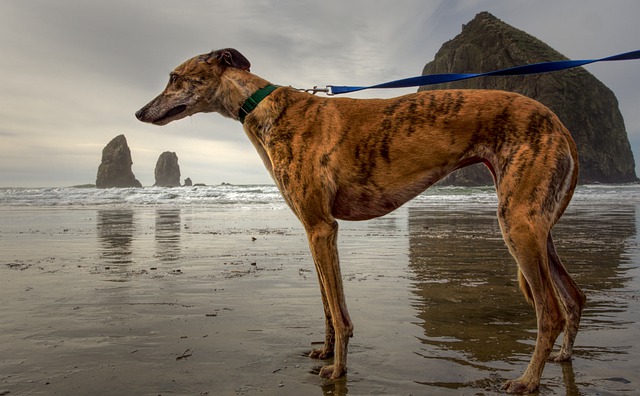 Many Greyhounds show extreme sensitivity to dietary changes, and many suffer from constant diarrhea if not fed the appropriate food. Most thrive on premium lamb and rice diets. If chronic diarrhea in the absence of parasites persists, a change in diet may be warranted.

A relatively uncommon immune-mediated corneal disease is found in some Greyhounds. This condition can result in total corneal opacityand blindness without proper, aggressive treatment.

Fractures may occur on the track, which often result in the euthanasia or retirement of the racing dog. However, fractures can occur in the retired racer. The Greyhounds bones are slim, and hence are more susceptible to fractures, even when they’re only racing around their back yard.

All dogs in south Texas must take heartworm preventive once a month.

Greyhounds have lower normal thyroid levels that other dogs. However, they can still have hypothyroidism. Hypothyroidism in greyhounds can not be diagnosed by a test in the veterinary hospital but requires a test sent to the lab.

Greyhounds have very thin skin and are extremely susceptible to lacerations. These almost always need to be sutured or stapled.

Probably the most common problems seen in racing dogs and often even in backyard racers, are musculoskeletal injuries. Strains, sprains, ruptured muscles, and avulsions and tears of tendons and ligaments are frequently found.

Due to the poor diet and the constant muzzling, many Greyhounds suffer from dental decay, worn and broken teeth, abscesses and gum recession. All broken and diseased teeth should be removed and infected gums treated. Then constant dental care may be necessary to keep your greyhound’s mouth healthy.

Usually not a pathologic condition, many dogs eat their food so fast that they regurgitate it immediately. This problem can often be alleviated by elevating their food or using a larger bowl with a thin layer of kibble, so that they do not gobble their food.

This is a condition seen quite frequently in the Retired Greyhound. Excessive vocalization, destructive behavior, and inappropriate elimination are the classic signs often seen. Retired Greyhounds often become extremely attached to their new owners, frequently following them around the house constantly. Clomicalm (Clomipramine) is often very useful, along with behavioral conditioning, in the elimination of these frustrating destructive behaviors.

Due to the poor sanitary conditions they are kept in, many Retired Racers suffer from chronic skin diseases. Many chronic skin infections require extended special treatments. Others will benefit from dietary supplements.

Poorly haired dogs may develop small bloodblister like lesions on various areas of the body. Most often appearing on the belly and thighs, these small raised lesions are exacerbated or even due to sunlight. This is the benign precursor to a cancerous condition, so it is recommended that dogs that develop this condition be protected from sunlight with skin block and protective clothing

This is a term used to describe torn interdigital tissue. This condition can occur on the track and in the backyard. This injury is best treated by debriding and suturing together the two portions. Bandages must be kept on for at least two weeks. If this is not successful, the dog can manage with the tear as long as it heals properly.

Like other large-breed, long-tailed dogs, Greyhounds often sustain injuries to the ends of their tails. Proper bandaging, is usually sufficient to allow healing. Amputation is rarely necessary except in long-standing injuries.

Besides Babesia, Ehrlichia, Lymes and Rocky Mountain Spotted Fever, there areother more recently discovered diseases transmitted by ticks, which can affect many dogs. Bartonellosis and Hepatazoonosis are two tick-transmitted diseases which can elude the most extensive diagnostician.

Hyperthermia and Hypothermia are both very common diseases in the Greyhound due to their minimal level of insulation. Owners should be aware that this breed is more susceptible than most others to these conditions.

Be aware that Greyhounds are very susceptible to toxicities due to insecticides. Organophosphates are often lethal to the Greyhound. Examples of unsafe products are: Zodiac products, Blockade, Raid, Flea collars, Proban, Breakthru and Biospot (the latter two have too high a level of pyrethrin). Frontline and Advantage Multi are safe for greyhounds. Never use over-the-counter flea products on Greyhounds.